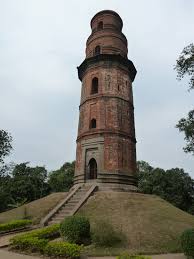 Kolkata, formerly known as Calcutta, is the educational, commercial and cultural centre of the Eastern part of India, and is the third most populous metropolitan city of India. Kolkata is a pioneer in the field of drama, arts, theatre and literature with several nobel laureates contributing to the Kolkata culture.

Kolkata, the 'cultural capital of India' has been announced as the safest city for women in the country. The latest data of the National Crime Record Board (NCRB) reveals that Kolkata has topped the list of 19 Indian cities considered safe for women.

During the 18th century, Malda was the seat of prosperous cotton and silk industries. The area grows rice, jute, legumes and oilseeds. Malda is also famous for its mangoes and mulberries.

The last capital city of independent Bengal before British rule was named after Nawab Murshid Quli Khan, the Dewan of Bengal, Bihar and Orissa. Situated on the banks of the Bhagirathi, it is a city of splendours and is famous for its silk.

Berhampur Tourism. Berhampur, also known as Brahmapur is known as the home of Lord Brahma and is usually known as the silk city- the city which is famous for the lustrous ikkat silk sarees in different colours and patterns.

Day 1
Kolkata – Malda
Day 01: Kolkata – Malda (365 kms / approx 10 hrs) Early morning start for Malda once the ancient capital of Bengal. The district maintains the tradition of the past in culture and education. It was formerly known as English Bazaar as an English factory was established here in 1771. This place is also famous for mango cultivation. On arrival check into your hotel. Rest of the evening is free for the leisure. Overnight at Malda.
Day 2
Malda Sightseeing
Day 02: Malda Sightseeing After fresh up move to famous ancient Temple Johura Kalibari which was established by Raja Bollal Sen. Enjoy your breakfast in famous Aam Bagan (Mango Garden) of Malda. Visit Adina Mosque which was built in AD – 1347 probably the size of Mosque is the 3rd largest in the world. Later visit Pandua, which was also the Capital of ancient Bengal. Its ancient name was Pandunagar. The Pandavas of Mahabharat had stayed over here and dominated this area. Proceed to Eklakhi Mosque which was built in AD - 1414 with an investment of one Lac. By Hindu Raja Jodu who was converted into Muslim and was known as Jalaluddin Md. Sha. Evening back to Hotel. Overnight stay at Malda.
Day 3
Malda to Murshidabad
Day 03: Malda to Murshidabad (175 kms / 4 & half hrs). After breakfast proceed to Gaur & Mohadipur. Visit Ramkeli, Dakhil Darwaja, Firoz Minnar, Kadam Rasul, Chika Masjid, Malda Museum and Subhankar Park. Back to hotel. Afternoon drive to Murshidabad, the last capital city of independent Bengal was named after Nawab Murshid Quli Khan, the Dewan of Bengal, Bihar and Orissa. It is situated on the banks of the Bhagirathi and a city of splendors & famous for its silk. The rich tradition of silks and in the past ivory carvings are the pride of Bengal's handicrafts. On arrival check into your hotel. Overnight stay at Murshidabad.
Day 4
Visit Berhampur and Murshidabad
Day 04: Visit Berhampur and Murshidabad Today after breakfast you will visit site of the Katra Mosque, which was built in 1724 and was modeled after the great mosque at Mecca. You will also visit Hazarduari, or “A Thousand Doors,” the nawabs’ massive Italian Baroque palace, which features an enormous chandelier presented by Queen Victoria and a library of over 10,000 books. Later visit Imambara, Kathgolap Garden, Motijhil, Khoshbag and Jahan Kosha (A CANON BUILT IN 1637). Murshidabad is also a center for shola pith (Indian cork) carving. Artisans create beautiful decorative objects and bridal headwear from this unique, light-weight material, which is also the plant used in the sola topi, or European colonial pith helmet. In the afternoon visit to one of the largest silk thread production cooperatives in India, where we will watch silk being extracted from silkworm cocoons and spun into fine thread for weaving. Overnight stay at Murshidabad.
Day 5
Murshidabad – Kolkata
Day 05: Murshidabad – Kolkata (200 kms / 7 hrs drive) After breakfast check out from hotel and proceed to Kolkata. Enroute visit Plassey (HISTORIC PLACE OF BATTLE OF PLASSEY,1757). While driving towards Kolkata, you will visit a number of places such as Shantipur, Phulia and Beldanga, known for their silk and cotton hand woven saris, dhotis, jacquards and jamdani (muslin) of superfine texture. Later you will transfer to airport or railway station for your onward journey. Note: It is advisable to arrive Kolkata one day earlier or reach by early morning flight/train latest by 08 AM to start your tour and book your departure train/flight during evening only after 6 PM.